“The fourth quarter results were significantly affected by decreased revenues from heavy-duty truck customers. Demand from heavy-duty truck customers declined due to labor strike shutdowns at multiple customer locations, the beginning of a cyclical downturn and normal seasonality. Anticipating the revenue decrease, the Company reduced costs in the fourth quarter through headcount reductions, shift modifications and temporary plant shutdowns. We were not able to fully offset the decrease in revenues, but believe the cost reductions made, along with a seasonal rebound in revenues from the fourth quarter, has set up the Company for a solid first quarter in 2020,” said Duvall.

The Company announced in November 2019 that it provided its customer, Volvo Group, with a twelve-month notice of its intention to terminate its supply agreement. “The Company is pleased to announce that it was able to come to a mutual resolution with Volvo and renegotiate certain terms of its supply agreement. Consequently, the Company has rescinded its termination notification,” said Duvall.

Selling, general and administrative expenses decreased in the fourth quarter compared to the same period in 2018 due primarily to lower labor and benefit costs and lower professional fees, as the Company reduced costs in response to decreasing sales. Selling, general and administrative expenses increased for the full year 2019 compared to the full year 2018 due primarily to higher spending on labor to support the Company’s turnaround efforts and as a result of higher sales.

Through a focus on generating free cash flows (non-GAAP), the Company reduced its total debt outstanding at December 31, 2019 to $49.4 million from $59.0 as of September 30, 2019. Lower working capital levels and a reduction in spending allowed the Company to generate free cash flows in the fourth quarter and reduce its outstanding line of credit balance as of December 31, 2019 by 42% from September 30, 2019.

Outlook
Based on industry analysts’ projections and customer forecasts, the Company expects sales levels for 2020 to decrease compared to 2019 due to decreased demand from truck customers. ACT Research is forecasting 2020 North American production of heavy-duty trucks to decrease approximately 34% compared to 2019.

“While the fourth quarter heavy-duty truck plant shut downs and reduction in demand reduced profitability, we continued to see benefits in the fourth quarter from operational improvements we made throughout 2019. In 2020 we will use operational systems implemented in 2020 to focus on several key performance metrics including improved quality performance, labor productivity, scrap and overhead spend reductions,” said Eric Palomaki, Executive Vice President of Operations. “Through the outstanding hard work and efforts of our dedicated teams we have been able to deliver substantially improved service to all of our customers. In 2020 we will build off these changes and systems to improve financial performance,” Palomaki concluded.

“The past year was a year of significant foundational improvements, which we are now just realizing substantial benefit. We have already seen benefit in the first two months of 2020 with an improvement of more than $5.5 million in operational profit compared to the same period in 2019. We anticipate the first quarter of 2020 to be the Company’s first profitable quarter since the second quarter of 2019. Our operational foundation has stabilized and is now moving into a continuous improvement phase, with our focus turning to leveraging our Sales & Marketing function across our entire business. The 2019 year was all about fixing problems and servicing our customers, so that we could successfully operate and grow the business. We expect 2020 to realize the full financial benefit of our operational stabilization efforts, which will allow us to focus on the long-term profitable growth of the Company,” Duvall concluded.

Core Molding Technologies believes that the following factors, among others, could affect its future performance and cause actual results to differ materially from those expressed or implied by forward-looking statements made in this report: business conditions in the plastics, transportation, marine and commercial product industries (including changes in demand for truck production); federal and state regulations (including engine emission regulations); general economic, social, regulatory (including foreign trade policy) and political environments in the countries in which Core Molding Technologies operates; safety and security conditions in Mexico and Canada; dependence upon certain major customers as the primary source of Core Molding Technologies’ sales revenues; the efforts of Core Molding Technologies to expand its customer base and increase profitability; the ability to develop new and innovative products and to diversify markets, materials and processes and increase operational enhancements; the actions of competitors, customers, and suppliers; failure of Core Molding Technologies’ suppliers to perform their obligations; the availability of raw materials; inflationary pressures; new technologies; regulatory matters; labor relations; labor availability; the loss or inability of Core Molding Technologies to attract and retain key personnel; the Company’s ability to successfully identify, evaluate and manage potential acquisitions and to benefit from and properly integrate any completed acquisitions, including the acquisition of Horizon Plastics; the risk that the integration of Horizon Plastics may be more difficult, time-consuming or costly than expected; expected revenue synergies and cost savings from the acquisition of Horizon Plastics may not be fully realized within the expected timeframe; revenues following the acquisition of Horizon Plastics may be lower than expected; customer and employee relationships and business operations may be disrupted by the acquisition of Horizon Plastics; federal, state and local environmental laws and regulations; the availability of capital; the risks associated with our current levels of indebtedness, including borrowings under our Amended A/R Credit Agreement and the ability to restructure or refinance our existing debt or otherwise adhere to financial covenants related to our borrowing arrangements; the impact of the inclusion in any report of our auditor regarding substantial doubt as to our ability to continue as a going concern; the ability of Core Molding Technologies to provide on-time delivery to customers, which may require additional shipping expenses to ensure on-time delivery or otherwise result in late fees and other customer charges; risk of cancellation or rescheduling of orders; management’s decision to pursue new products or businesses which involve additional costs, risks or capital expenditures; inadequate insurance coverage to protect against potential hazards; equipment and machinery failure; product liability and warranty claims; and other risks identified from time to time in Core Molding Technologies’ other public documents on file with the Securities and Exchange Commission, including those described in Item 1A of the Annual Report on Form 10-K for the year ended December 31, 2019. 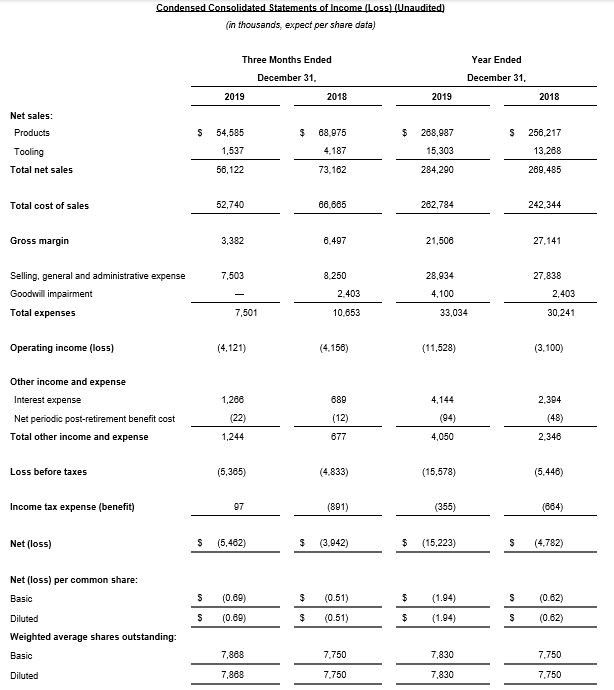 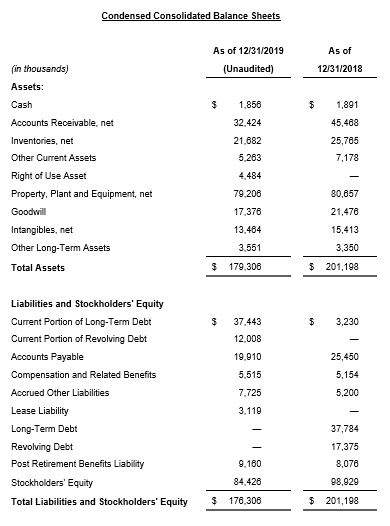 Non-GAAP Financial Measures
This press release contains financial information determined by methods other than in accordance with accounting principles generally accepted in the United States of America (“GAAP”). The Company’s management uses non-GAAP measures in its analysis of the Company’s performance. Investors are encouraged to review the reconciliation of non-GAAP financial measures to the comparable GAAP results available in the accompanying table.

Non-GAAP Reconciliation of Free Cash Flow
This press release includes references to free cash flow, a non-GAAP financial measure that comprises cash provided by operating activities less cash expenditures for property, plant and equipment. Free cash flow is a measure used by management and the Company’s board of directors to assess the Company’s ability to generate cash. Accordingly, management believes that free cash flow provides useful information to investors and others in understanding and evaluating our ability to generate cash flow from operations after cash expenditures for property, plant and equipment.

This non-GAAP financial measures is used in addition to and in conjunction with results presented in accordance with GAAP. The non-GAAP financial information presented herein should be considered supplemental to, and not as a substitute for, or superior to, financial measures calculated in accordance with GAAP and are reconciled to the most appropriate GAAP number below.