The Company reported net income for the third quarter of 2020 of $3.3 million, a $9.4 million improvement compared to the $6.1 million loss reported for the same period in 2019. The net income increase was largely driven by operational improvements as well as lower interest and tax expense. The results for the first nine months of 2020 reflect the operational improvements the Company made during its turnaround as the Company generated net income of $9.0 million compared to a net loss of $9.8 million for the first nine months of 2019.

Although net sales decreased $14.8 million to $59.9 million, or approximately 20%, for the third quarter of 2020 compared to the same period last year, net sales increased by 58% from the second quarter of 2020, which was heavily impacted due to COVID-19 shutdowns in North America. The sales decrease in the third quarter 2020 compared to the same period last year was primarily a result of the cyclical downturn in North American heavy-duty truck production. The heavy-duty truck sales decrease was partially offset by higher sales in other markets served by the Company, including construction and all-terrain vehicles. For the nine months ended September 30, 2020, net sales decreased $66.5 million, or 29%, compared to the same period last year, primarily due to the North American heavy-duty cyclical downturn and the impact of COVID-19.

“Our strong financial performance in the third quarter 2020 is a direct result of our ability to quickly and efficiently increase output. It was a challenging quarter, but we have demonstrated that the Company operates very differently today than before the start of the transformation, in January of 2019, when significant demand increases drove financial losses,” said David Duvall, President and Chief Executive Officer. “I am excited about the future and very proud of the entire Core team on how we have progressed in the transformation. Core now has a solid foundation of operational execution and the leadership to continually drive a culture of operational excellence,” concluded Duvall.

Third quarter 2020 gross margin increased 9.4 percentage points compared to third quarter 2019. The gross margin percentage increase was due to a favorable net change in product mix and productivity efficiency which were a direct result of the Company’s operational systems and processes implemented throughout 2019. “Third quarter 2020 gross margin percent was the highest since the first quarter of 2016,” said Eric Palomaki, Executive Vice President of Operations. “The entire Core operations team has embraced a new data driven focus and disciplined method to eliminate waste from all processes. Our ability to turn these already implemented improvements into a foundational process that builds upon itself with continuous improvements across all areas of the operation is demonstrated by our gross margin improvement,” continued Palomaki.

The Company’s debt to equity ratio as of September 30, 2020 is 37%. During the third quarter 2020 the Company generated cash flows from operations of $12.6 million which were used to reduce outstanding debt by $1.1 million and increase cash on hand by $10.2 million. “Another quarter of strong operational performance allowed the Company to further improve its financial position prior to the completion of our refinancing in October 2020,” said John Zimmer, Executive Vice President and Chief Financial Officer. “As of the closing of the new debt facility the Company had available liquidity of approximately $25 million and reduced its weighted average effective interest rate on its term debt to 5.75% compared to 8.0% under its existing credit facility. Having the new credit facility in place lowers the Company’s overall borrowing costs and provides liquidity to allow the Company to focus on growing the business,” Zimmer concluded.

Outlook
For the full year 2020 the Company expects sales to be lower than prior year primarily due to the effect of the cyclical downturn in North American heavy-duty truck market and the effect of COVID-19. Based on ACT Research projected production for heavy-duty truck for the fourth quarter 2020 and customer forecasts in several of the markets the Company serves, we expect fourth quarter 2020 revenues to be only slightly lower than the fourth quarter 2019. The Company continues to monitor closely any potential effects of COVID-19 on the operations of our customers and is prepared to make operational adjustments accordingly.

“As previously announced, our turnaround is complete. The turnaround was a necessary first step in the transformation journey to becoming a leader in the industries we serve. We are purposefully creating a foundational culture of organizational strength and disciplined execution that will be a competitive advantage,” said Renee Anderson, Executive Vice President of Human Resources. “We have implemented an organizational development system focused on organizational health. We are seeing results from this initiative, impacting the culture internally and solidifying the Core employer brand externally,” concluded Anderson.

“We are excited to see the holistic improvements across our business and how this is already being realized in new business opportunities. We have increased our sales opportunities by over 350% since the first quarter of 2020 and won new and replacement business worth over $45 million,” said Duvall.

As the Company continues to strengthen its resources in technology and innovation it also must make sure that it optimizes current resources. This has led the Company to the decision to close our Cincinnati facility located in Batavia, Ohio in 2021 and work with our customers to relocate the business into other Core locations or to third parties. The team in Cincinnati has made tremendous improvements in the operations over the past 18 months. However, the operations still do not, and will not in the future, provide the required returns to support ongoing investment in the location. The Cincinnati facility revenue accounts for less than 5% of the Company’s total revenues and the Company anticipates approximately half of those revenues will transition to other Core locations. The Company anticipates shutdown costs and any asset impairment charges to be immaterial.

“We will continue to strengthen our resources in technology and innovation, organizational development and complete our Go-To-Market transformation to further refine our ability to provide differentiated value to our customers and the market,” concluded Duvall.

Core Molding Technologies believes that the following factors, among others, could affect its future performance and cause actual results to differ materially from those expressed or implied by forward-looking statements made in this report: business conditions in the plastics, transportation, marine and commercial product industries (including changes in demand for truck production); federal and state regulations (including engine emission regulations); general economic, social, regulatory (including foreign trade policy) and political environments in the countries in which Core Molding Technologies operates; the adverse impact of coronavirus (COVID-19) global pandemic on our business, results of operations, financial position, liquidity or cash flow, as well as impact on customers and supply chains; safety and security conditions in Mexico and Canada; dependence upon certain major customers as the primary source of Core Molding Technologies’ sales revenues; efforts of Core Molding Technologies to expand its customer base; the ability to develop new and innovative products and to diversify markets, materials and processes and increase operational enhancements; the actions of competitors, customers, and suppliers; failure of Core Molding Technologies’ suppliers to perform their obligations; the availability of raw materials; inflationary pressures; new technologies; regulatory matters; labor relations; labor availability; the loss or inability of Core Molding Technologies to attract and retain key personnel; the Company’s ability to successfully identify, evaluate and manage potential acquisitions and to benefit from and properly integrate any completed acquisitions; federal, state and local environmental laws and regulations; the availability of capital; the ability of Core Molding Technologies to provide on-time delivery to customers, which may require additional shipping expenses to ensure on-time delivery or otherwise result in late fees and other customer charges; risk of cancellation or rescheduling of orders; management’s decision to pursue new products or businesses which involve additional costs, risks or capital expenditures; inadequate insurance coverage to protect against potential hazards; equipment and machinery failure; product liability and warranty claims; and other risks identified from time to time in Core Molding Technologies’ other public documents on file with the Securities and Exchange Commission, including those described in Item 1A of the Annual Report on Form 10-K for the year ended December 31, 2019. 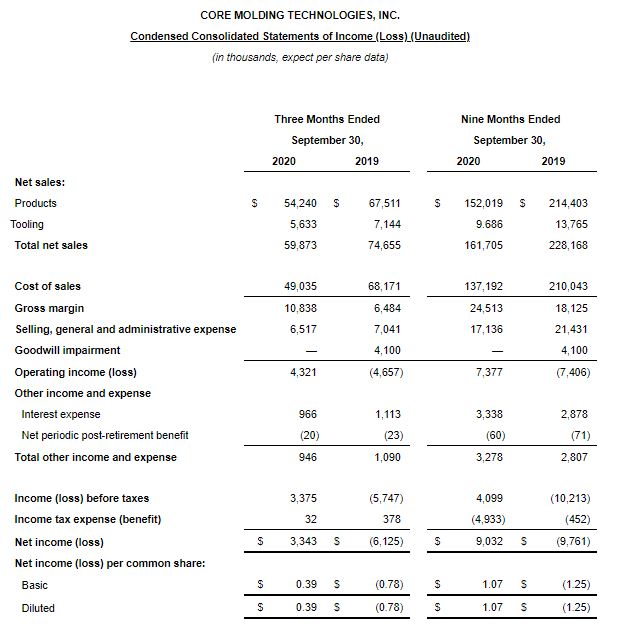 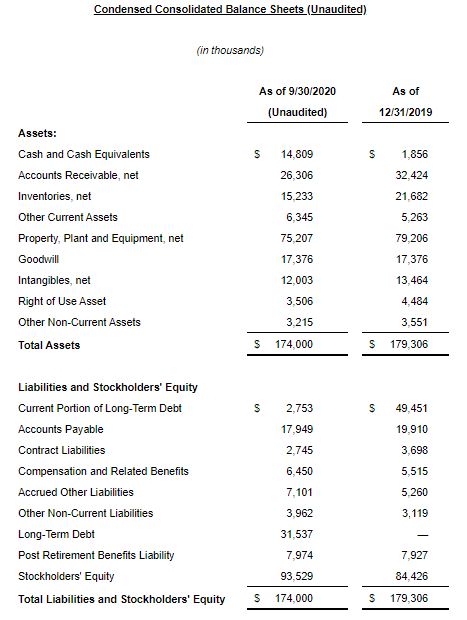 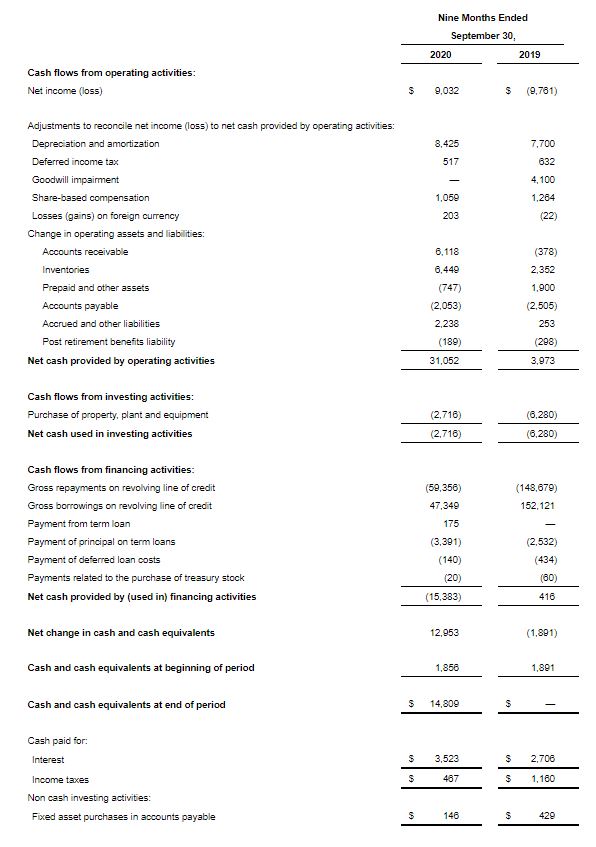 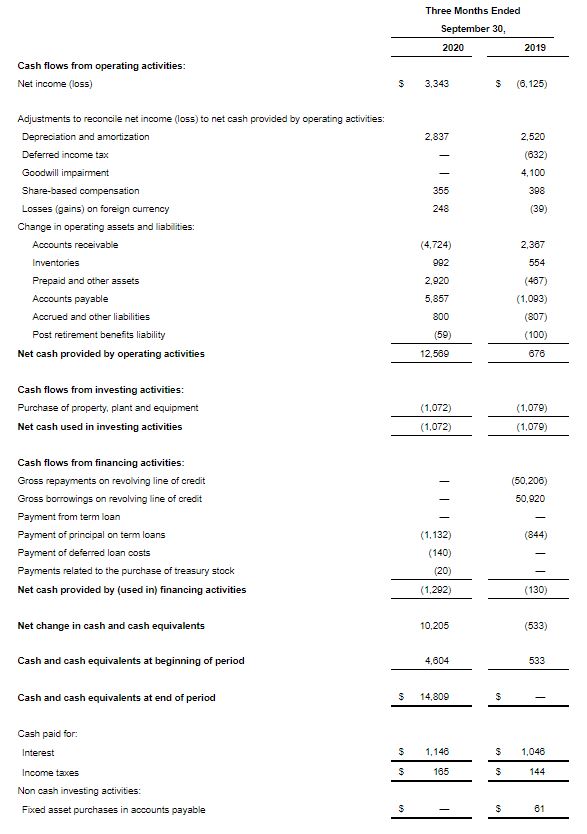